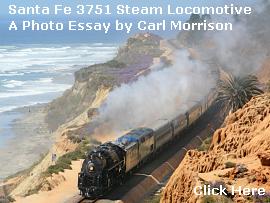 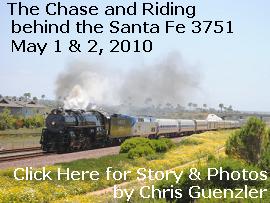 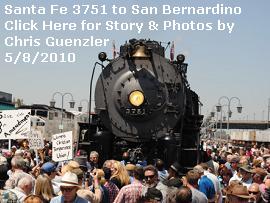 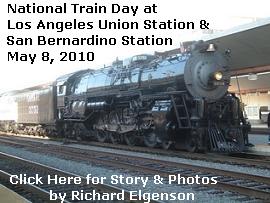 TrainWeb was onboard the Santa Fe 3751 Train roundtrip
from Los Angeles to Railfair'99 in Sacramento!
Click here for photos, video clips and a travelogue of that journey!

The following are photographs and video clips with sound that were taken of the Santa Fe 3751 steam locomotive as it passed through the Fullerton Santa Fe Depot in Fullerton, California on Tuesday, January 12, 1999 between 1:08 P.M. and 1:20 P.M. Pacific Time.

All Of The Following
Was Posted In 1999:

The train was being moved from a yard in San Bernardino to the Amtrak Redondo Yard in Los Angeles. Right behind the locomotive was its tender, a baggage car, and then 46 freight cars. The first several freight cars were double stack cars. How often are you likely to ever see a steam locomotive pulling a set of double stack freight cars?

We were able to run past the end of the Amtrak train on the south platform to obtain additional still photographs and video clips of the steam locomotive which also included the rear facing F59PHI unit on the Amtrak train. This is the Amtrak train that is operating with the full-length dome car and that dome car can be seen in some of the images of the steam locomotive. The Amtrak San Deigans train stayed in the station for quite a while as there was a bit of baggage to load onboard. Fortunately, the Fullerton Santa Fe Depot was also designated as a service stop for the Santa Fe 3751 steam locomotive and it remained in the station for quite some time while the crew inspected a number of systems on the locomotive.

The Amtrak train did leave the station before the 3751 got under way again. Thus, we were able to take serveral more still photographs and video clips of the steam train powering up and departing from the station, even from the south platform.

In Photo Set #1, the very last photo shows the position of the videocamera that took the live video of the steam locomotive from our office (Video Clips 12, 13, 14 and 15). There is a curtain blocking your view of the actual videocamera that is in the window. The purpose of the heavy curtain is to avoid recording the reflection of the office lights in the evening. The next to last photo in Photo Set #1 is a view of the north platform at Fullerton after the steam locomotive left the station. The four windows that you see upstairs in the depot are the windows of the TrainWeb office. Downstairs is the Santa Fe Cafe which provides indoor and outdoor seating. This is a great place to just sit, relax and watch trains. You can even grab a quick snack or sandwich and sip a beverage of your choice: coffee, soda, beer or wine. With 3 sets of tracks, 46 passenger trains and even more freight trains each day, the Fullerton Santa Fe Depot and the Santa Fe Cafe are very popular with railfans!